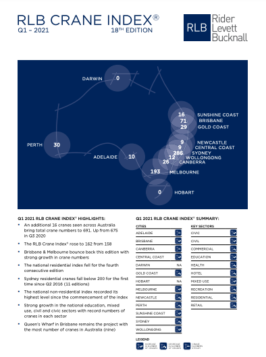 According to today’s release of the Q1 2021 RLB Crane Index®, the index rose by 2.4%. There are currently 691 cranes working on key projects across Australia, an increase of 16 cranes over the past six months.

Domenic Schiafone, the Rider Levett Bucknall (RLB) Oceania Director of Research and Development said, ‘These past six months has seen the country slowly accelerate towards a post-COVID ‘new normal’.

He continued, ‘The federal government’s stimulus measures have assisted the economy, but the impact on construction is seeing the industry operate at two speeds. Residential detached housing, assisted by both federal and state incentives, does not appear to have suffered from any COVID hangover at this stage. Government-sponsored civil projects continue to expand across the nation while education and civic projects have also grown sharply this edition.’

According to the RLB report, multi-storey residential developments have recorded their fourth consecutive fall in the index, mirroring the decline in building approvals and work done during 2020. The industries hit hardest by the lockdown during 2020, namely tourism, retail and commercial all recorded falls in the numbers of cranes across the country.

Non-residential index at highest level since 2012

The mixed-use sector saw the biggest rise with an additional 26 cranes. The education and civil sectors increasing by 19 and 16 respectively. Residential cranes fell by 39.

Since our last edition, 371 cranes were added to our skylines and 355 removed.

Brisbane recorded its second biggest increase in crane numbers since Q4 2015.  Melbourne, which endured the longest and strictest lockdown amongst the capitals bounced back this edition with 16 additional cranes observed.

Domenic noted, ‘Uncertainty as a hangover from 2020 is still prevalent, and we see testing times ahead. We anticipate the economic impacts of COVID-19, both federally and state, to be felt for the duration of 2021.’

‘Having said that, enquiries for new projects continue. While activity is down, indicators suggest we are in much better situation than what we had originally anticipated,’ he added.

‘Contractors have also reported they have been quite active from a tendering perspective and similarly, perhaps more so than anticipated. We are seeing some competitive tender results, which is great for developers and owners, and will help in keeping projects viable,’ he said.

Looking around the country, Sydney continues to be the main driver of the crane count. Of the 691 cranes sighted across Australia, Sydney had 286, Melbourne 193, Brisbane 71, Perth 30, Gold Coast 29, Canberra 26, Adelaide 10, Wollongong 12, Sunshine Coast 16, Newcastle 9, and 0 for Hobart and Darwin .

+61 3 9690 6111
domenic.schiafone@au.rlb.com
FIND YOUR NEAREST RLB OFFICE
Prev
Previous
Wellington and Queenstown cranes hit new peak
Like this post? Keep up with us on Linkedin and Twitter
Next
Next
Covid-19: Global Survey Report, Issue 9