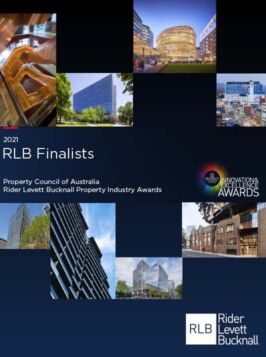 Eyes on the prize

The RLB Australian Development of the Year Award turns 30 this year. Rider Levett Bucknall’s team reflect on their favourite projects and what awards mean beyond the applause.

RLB and the Property Council have presented the Innovation and Excellence Awards since 1982. Together, we launched the RLB Australian Development of the Year Award in 1991.

Stephen Mee, RLB’s managing director in New South Wales, joined the firm in 1983 as a cadet, and has cheered for dozens of game-changing projects since then. But no award winner is closer to Mee’s heart than Investa’s Barrack Place in Sydney, which took home the coveted title last year.

“I’m personally very proud of Barrack Place. Many times I’ve driven around the city with my kids, pointed to Barrack Place and said ‘that’s my project’.”

The team behind Investa’s asset delivered a series of ‘firsts’, including Australia’s first operational digital twin and the nation’s first WELL Core-and-Shell Gold pre-certification. There were plenty of challenges on the project, Mee notes. Market costs were escalating as Investa went out to tender, and putting a price on those ‘firsts’ put Mee’s team’s skills to the test.

But so many innovations in design and technology – from the advanced air filtration and UV lamps that kill microbes to the extensive greenery and terrace spaces – set the building up for the future of work. Mee says this commitment to innovation helped Investa to optimise the building’s value. “Achieving a national award for a building that was a financial success and that respects the heritage of the city was a great accolade.”

Another project that resonates with RLB’s team is the Palais Theatre, an icon along St Kilda’s esplanade in Melbourne. The project took home the national heritage award in 2019.

“It’s an iconic theatre with significant heritage value. It was a bespoke project – the sort of project that comes along once a decade – and it presented a unique set of challenges,” says Tony Moleta, RLB’s managing director in Victoria.

When RLB’s team first sighted the project, the façade was in such a poor state of repair that the theatre was permanently encased in scaffolding. “Parts of the façade were crumbling and causing a hazard to the public,” Moleta notes. The electrical systems, with non-conforming cabling, “gave us a real appreciation for the scale of the task at hand,” Moleta’s colleague, associate Shane Kelly adds.

Restoration of heritage projects like the Palais Theatre depends on subcontractors that have a skillset in conservation. RLB’s team scoured the globe looking for craftspeople who could replicate and recast the moulded motifs on the façade. “You can’t apply a standard square metre rate to work like this,” Moleta says.

“Rectification of façades like the Palais Theatre are really an artform in many respects,” Kelly adds. “It is so important that the skillset is preserved and passed on to future generations otherwise we run the risk of not being able to restore our beautiful heritage buildings in the future.”

The Palais Theatre project shows that heritage values can be restored without blowing the budget. “We were under budget even after scope of works expanded. It is a source of immense pride to be part of the team that restored this icon to our city,” Moleta adds.

Lendlease took home the top prize in 2019 for Australia’s first engineered timber office, International House in Sydney. But it’s another timber tower that is closer to home and closer to the heart of Matt Long, RLB’s managing director in Queensland.

Lendlease’s 25 King, which took home the RLB Queensland Development of the Year Award in 2020, is several storeys higher than International House (nine, compared to six), and when completed “was the largest timber commercial tower at the time,” Long notes. It also claimed Queensland’s first WELL Platinum rating, making it a haven for health and wellbeing.

“It was exciting to work on a project that used a new construction method that was new and relatively unfamiliar to Brisbane, and even Australia,” Long says. Construction was not without its challenges. Without an adequate local supply of cross-laminated timber, “we spent a lot of time talking to suppliers in Europe to get our heads around the costs and then talking to the local market about how we would assemble it on site,” Long reflects.

Lendlease’s vision challenged the project team and delivered a “workplace that looks towards the future,” Long adds. “With health, wellbeing and that ‘feel good factor’, it’s an innovative example of how bricks-and-mortar play a role in bringing people back to our cities.”

Steeped in history and loved by sports fans, Adelaide Oval boasts a century-old scoreboard, giant Moreton Bay fig trees and sweeping views of Adelaide’s parklands and St Peter’s Cathedral. But after a major upgrade in 2014, the Oval’s history sits comfortably alongside a contemporary design that maximises the experience for sports fans.

Adelaide Oval’s redevelopment took home the RLB State Development of the Year in 2015, and no one could have been prouder than RLB’s director John Drillis, who was part of the project team when it was still designs on a drawing board.

“It was an extremely collaborative project right from the early feasibility stage,” he says. “People approached the project with the right attitude, working through problems to find smart solutions.”

And there were challenges, from host of heritage constraints to the politics of bringing football and cricket to the same home. “At the time it was the largest social infrastructure project in South Australia. The total project budget was $525 million, and there was some concern about spending so much money,” Drillis reflects.

“It was a brave and ambitious project, and that vision has delivered dividends. The South Australian people have embraced the redevelopment, and that paved the way for other social infrastructure projects in the state.

“Social infrastructure projects are so important to the community’s social fabric. Projects like the Oval redevelopment put money back into the economy and build a legacy for the community.”

Fiona Doherty, RLB’s director in Canberra, also loves social infrastructure projects, and the expansion of the Canberra Hospital currently takes up a lot of her time. But she also worked on another winning building, Winyu House, which was ACT Development of the Year in 2018.

“It really was the benchmark for new office buildings in Canberra the year it won,” Doherty says.

The building incorporates more than 10,000 sqm of commercial office space, as well as ground floor retail, conference facilities, an integrated childcare centre and a government shopfront. There’s an impressive open central atrium that connects people both vertically and horizontally.

Doma Group’s Little National Hotel is another standout for reimagining the business hotel. “The awards aren’t just about the most iconic buildings. They are about the most financially successful projects – which is why we are a sponsor,” Doherty says.

“Reflecting the latest concepts in contemporary office design has been a continual theme over the years,” says Mark Bendotti, RLB’s managing director in Western Australia.

The one that Mark remembers is Brookfield Place – a tall and notable landmark building on the Perth skyline gently integrated amongst a cluster of repurposed heritage-listed buildings. This project took home the Australian Development of the Year Award in 2014.

The efficient steel structure coupled with external bracing and energy efficiency makes this building an engineering highlight for modern office developments. The heritage elements were successfully conserved and interwoven within the modern design features, providing a safe, healthy and productive space for over 5,000 people.

“Brookfield created an industry-leading commercial development that is also a dynamic and vibrant place for the community, both day and night,” says Bendotti.

“The cultural and retail precinct combines a state-of-the-art office tower and significant retail opportunity in sensitively restored heritage buildings, art galleries, fine dining and entertainment options. The development enables people outside the industry to actively engage with the building and understand the value that engineering and construction delivers to the community,” Bendotti concludes.

The Property Council of Australia / Rider Levett Bucknall Innovation and Excellence Awards will be held on Wednesday 15 December at the ICC Sydney. Tickets are back on sale, so book your tickets today!

+61 2 9922 2277
stephen.mee@au.rlb.com
FIND YOUR NEAREST RLB OFFICE
Prev
Previous
Creating a vision for the future via innovation today
Like this post? Keep up with us on Linkedin and Twitter
Next
Next
How small infrastructure can make a big difference