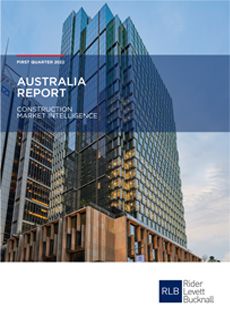 This is partly due to the industry being designated as an essential industry by most state governments, enabling a stable environment for both the completion of existing projects and the commencement of new ones.

Mr Stephen Mee, Managing Director of Rider Levett Bucknall in NSW said, “The industry has seen the total value of approvals in Australia rise by 16.3% ($28b) for the 2021 financial year (FY21) over FY20. Significant upturns (above 15%) have been seen in approval levels in all states except Victoria (up 2.5%).”

He noted, “For the seven months to January 2022, approval levels were again higher than the corresponding previous year by 9.4%.”

According to RLB, forecast activity into 2022 indicates that with increasing values of both work yet to be done and commencements in the majority of states, the industry is in a positive mode with potential increases of work done to be performed in the coming years.  The start of 2022, however, has seen a rise in the number of ‘known unknowns’ (a term used by Donald Rumsfeld in his 2002 speech about foreign intelligence) that will impact the industry over the short to medium term.

Mr Mee continued, “Also compounding the short and mid-term forecasts for the industry at the moment are the ‘unknown unknowns’. These include flow-on effects from the conflict in the Ukraine such as higher fuel prices, potential timber shortages imported from Baltic nations and generally a very unsettled geopolitical landscape.”

“It again is too early to determine what the long-term impacts of the conflict will be, but they could continue for some time yet,” he said.

RLB is seeing significant construction activity aided by all state governments with significant investment in road, rail, health and social/affordable housing projects with many brought onstream early to keep the economy moving. These projects do come at a cost however, a rapid rise in state and federal debt which must be repaid in the future.

The anticipated Reserve Bank of Australia lift in interest rates may quench, to some degree, the overly heated domestic housing market in all states but the demand for contractors, labour, plant and materials continues despite recent lockdowns, supply chain influences and the slowdown of economy due to COVID-19.

When the true scale of recent devastating floods in both New South Wales and Queensland are known, additional pressure will be seen in the need for additional materials, plant and labour to recommence the rebuilding efforts within these communities.

Mr Mee concluded, “Looking forward, RLB offices are predicting market pricing volatility due to all of the factors identified above. The quantum of construction escalation we are forecasting is not static as all the factors influencing construction pricing is very fluid at the moment.”

“We are also not alone in this conundrum – the global construction community are feeling the instability in supply chains, changing labour dynamics and increasing material cost increases. Each project is unique due to differing sites, architectural features, materials and plant being specified, differing procurement strategies being adopted and the allocation and acceptance of risk by both contractors and principals,” he added.

+61 2 9922 2277
stephen.mee@au.rlb.com
FIND YOUR NEAREST RLB OFFICE
Prev
Previous
Celebrating 50 years of market trends
Like this post? Keep up with us on Linkedin and Twitter
Next
Next
Auckland market and the residential sector powering the NZ construction industry