With International Women’s Day celebrations having taken place across the world this weekend, with the theme of #EachforEqual, we wanted to share the wise words and advice from some of the inspirational women within RLB’s worldwide offices. They openly discuss what attracted them to the built environment, what professional opportunities have been available to them and whether they still feel their workplace is predominantly a man’s world.

Entering the world of construction
As with many career paths and industries, there are various factors that could attract someone into a career in construction, no matter their gender.  While it has traditionally been a male-dominated area, the ratio is becoming more balanced with many of RLB’s female staff stating they chose construction because of a passion for the built environment – either through its aesthetic, its impact on the society or its value to the community.

Ann Bentley, Global Board Member at RLB, explains for her “it was an act of rebellion! I grew up and was educated in the 1960s and 70s, it was a very different world then. I was determined to have a career that had previously been denied to women or had been very difficult for women to pursue.” For others such as Tiffany Chan, Director in RLB Hong Kong, the inspiration was “the artistic and unique characters of skyscrapers in Hong Kong” and likewise for Ling Lam, Managing Director of RLB Hong Kong & China and Global Board Member, “urban and architectural design was something that inspired me.”

The impact that working within the built environment can have on society was the driver to the industry for others, with Iris Lee, Director, RLB Hong Kong & China explaining, “Living in Hong Kong, I used to watch on television as landslides and floods destroyed people’s homes. I was grateful to the people who built sturdy housing for us, so I wanted to become one of them.”  This passion to help others and to create a sustainable and inspiring built environment is a common theme echoed by RLB’s teams around the globe.  It isn’t just the multitude of job options that has made construction an appealing career choice, it is often the opportunity to be part of something that positively impacts the places we live, play and work.

How the industry has changed
Now actively involved in the industry, many felt that there are still misconceptions about the construction sector, especially when it comes to roles and opportunities available for women. Judy Ngan, Senior Project Manager at RLB UK, comments that many outside of the industry still believe “it is a male dominated world, and everyone always works on site wearing hard hats”. Lai Sun Mei, Associate in RLB Singapore agrees, but explains this is not the case, “it is not difficult to find women in all professions of any discipline be it project manager, architect, engineer, or quantity surveyor …there are many women in the construction industry that have made remarkable achievements recognised by the world too!” Lichelle Neethling, Director at RLB Pentad in South Africa agrees with this sentiment, “…women in this industry are becoming more powerful, not necessarily through intentional changes, but just simply by having the appetite for self-growth and empowerment.”

Guia Lasqueste from RLB Hawaii talks about how, in her experience, the industry has changed for the better, “My first role was as a project engineer, assigned to a cleanroom project, which was in the jobsite office with only two women on the entire project. Now we have full teams of women onsite, in site offices, and in our local offices. It’s a pleasure and a privilege to be a part of the evolution.” Tay Wan Ding, Research Manager in RLB Singapore, has also seen change in our industry. She comments, “In my last project, with the exception of the structural engineer, it was an all-female team!”  It is widely acknowledged that there is a challenge facing the construction industry around Equality, Diversity and Inclusion, and at RLB a key focus is on attracting and retaining a more diverse workforce and reflecting the communities in which we live and work. Our engagement with schools and colleges is an example of how we are engaging with the next generation to target and attract a more representative workforce of tomorrow.

Many believe this positive upward trend of gender balancing will continue and open doors for more women in senior roles, becoming tomorrow’s leaders. “Watching the women rise within our industry and company has given me hope for the future in our careers as well as push me to strive for success,” comments Julia Flores, Senior Cost Manager, MEP in RLB North America. 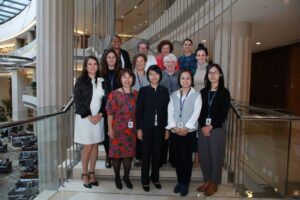 Building a diverse workforce
These preconceptions of the industry have often resulted in a shortage of talent and although RLB promotes diversity, inclusion and equality across all of its offices and all of its disciplines, the RLB team commented there is still work for the entire industry to do to encourage women to see it as an attractive career. Vuyolwethu Badi, Director, RLB Pentad talks about her experience in South Africa, “Equality is one of the most sensitive areas in the construction area, we are still working with people who are unconsciously biased.” Heather Evans, Associate and UK National Head of Sustainability Consultancy UK explains some of the ways she is helping this change, “The range of roles within construction is incredible but awareness of that is poor, so a major part of improving that perception is through education and mentoring young people.”  Cathy Sewell, Principal at RLB North America continues, “One of the most impactful things we can do to continue to promote women in the industry is to introduce these professions to girls at a very young age, so they know what is possible. We need to engage and develop these interests – something as simple as speaking to and working with classes of elementary age kids can be so impactful.”

On the other side of the world, the sentiment is the same, Lauren Papettas, Assistant Programmer at RLB Australia comments, “To encourage equality in the construction industry, I endeavour to always put my hand up, speak up, treat those I work with as equal whether male or female and continue to behave in a manner which encourages those around me to break down any ‘barriers’ which may stem from communication or limiting beliefs.”  RLB has active Diversity & Inclusion strategies and policies that permeate every level and area in which we work.  From graduate to senior management, everyone at RLB is encouraged to influence and implement this policy as a positive force in our everyday work, guiding the evolution of the organisation in the future.

Greatest achievements
Achievements across the RLB global business are varied and broad in their scope and impact. However, when we asked our global RLB team what achievements meant the most to them, it often wasn’t the professional milestones but working in an environment that was equal, diverse and had a level of respect, and one that promoted health and wellbeing of its employees. Andrea Lau, Quantity Surveying Digital Lead in RLB Singapore, told us her greatest achievement was “being seen and respected for the professional care and values I bring to others rather than my nationality, race, gender or age.” Rebecca Best, Partner at RLB UK claims that although awarded professional accolades such as becoming a RICS construction professional at the tender age of 21 and the first female chairperson of the RICS GM QS Professional Group, it was actually “being told by female students and colleagues that I’m a role model to them and I’m the reason that they joined the industry that I love so much.” And Katherine Shum, Director, RLB Hong Kong talks about her greatest achievement as retaining” a balance of life between my professional and my family.”

As International Women’s Day comes to a close for another year, RLB’s global team can be proud of their achievements and encouraging the next generation of female construction professionals.  After watching the industry go through a significant transformation when it comes to gender equality, Ann Bentley proudly reflects, “I think that the thing that I am most proud of is that when I entered the industry I stood out because I was a woman, whereas now if I stand out it is because of what I do, and I happen to be a woman.”

Thank you to all the contributors who took part and shared their thoughts.

Please enable Strictly Necessary Cookies first so that we can save your preferences!