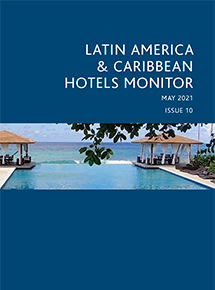 This glorious region of the world has been perhaps the worst hit of all by the dreadful side effects of Covid-19 (C19). Based on data recently published by www.voxeu. org, the LAC region has only 8% of the global population and yet accounts for over 25% of global deaths. It also lost an estimated 7.0% of GDP, the largest loss in a single year on record.

Hotel performance data across the region reflects the macro-economic trends, with all markets assessed having declined in every metric. The only market to record a profit in the period was Miraflores (Peru). In Brazil, the worst affected nation in the region (accounting for around half of all cases in LAC, according to www.statista, com in April 2021), hotel performance levels have fallen, but is not the worse affected. The largest decline in RevPAR was recorded in Bogota (-92%) and the largest decline in GOPPAR was recorded in Santiago (-197%).

C19 induced disruptions to supply lines across the region have had an impact on construction costs and perhaps more importantly on the programming of projects – after all, time is money.

Deals have been few and far between, but a number of refurbishments and new developments have allowed us to present an interesting transactions table. Most of the listings are refurbishments, but recent announcements (without pricing data) would suggest that new developments are still being launched across the LAC region.

Hotel performance data across the region reflects the macro-economic trends, with all markets assessed having declined in every metric.

+1 758 452 2125
david.piper@lc.rlb.com
FIND YOUR NEAREST RLB OFFICE
Prev
Previous
Covid-19: Global Survey Report, Issue 9
Like this post? Keep up with us on Linkedin and Twitter
Next
Next
2021 Caribbean Report