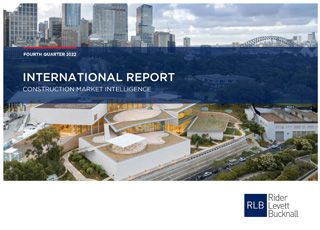 Although the global construction industry was impacted by government-imposed lockdowns during the Covid-19 pandemic, construction activity still expanded in 2020 and 2021; it was deemed essential in most countries. However, the global industry is now experiencing collateral damage caused by the pandemic.

A global questionnaire facilitated by RLB’s offices recently identified the major influences on regional construction inflation. Building material costs were pinpointed as the key driver in higher building costs across the globe. This is followed by availability of skilled labour and domestic interest rate rises. According to the survey results, 68% of the key drivers causing pricing spikes across the globe are externally controlled. As such, these drivers cannot be effectively managed by domestic construction industries. The largest driver within the survey was material costs (27%) which has both internal and external forces controlling pricing in each region. Other disrupters to escalation include labour availability, interest rates, supply chain logistics, general inflation, wage cost increases, increases in government-led construction spending, local energy prices, and contract risk apportionment. A graphical representation of the major influences, both external and internal, on regional construction escalation can be found on page 6.

Economic damage from the conflict in Ukraine

According to Deloitte’s Economic Rebound Shaken by Crisis in Ukraine (published in March 2022), Russia’s invasion of Ukraine has triggered turmoil within the global construction industry. Although, these markets were already under some strain due to the flow on effects of the pandemic. The importance of Ukraine and Russia from an economic standpoint is demonstrated by the numbers: the two countries hold some of the largest iron reserves in the world and are consequently among the largest iron exporters. Economic damage from the conflict will contribute to a significant slowdown in global growth in 2022 and add to inflation. Geo-political conflicts accounted for less than 2% of RLB survey responses. However, the impact of this conflicts fuels other drivers, including material cost issues (27% of survey responses), supply chain logistics (7%), foreign exchange volatility (3%), and fuel prices (3%).

Main growth drivers for the industry

Population growth in emerging countries, ageing populations in developed countries, greater urbanisation and concentration in megacities, the decarbonisation of the economy, and technology and digital transformations will be the main growth drivers for the industry in the coming decades. This is because all these factors will require significant investment in transport, water, waste management, social infrastructure, renewable energies, telecommunications, and adaptation to new technologies.

According to Deloitte, it is estimated that only 20% of the global infrastructure needed for 2050 has been built. This global infrastructure gap represents a challenge for governments and for the construction industry. Almost two thirds of the infrastructure investment forecasted for the next decade will centre on emerging countries, where infrastructure has a clear transformational impact on the lives of citizens and the development of businesses. However, even more developed countries will need to invest in infrastructure to improve competitiveness, meet increasing demand, sustain economic development, decarbonise the economy and digitalise. This need for significant social investment will add pressure to already limited resources within the industry (16%) and has already been identified as a major influence on construction pricing. Another key driver identified in the survey that will impact construction escalation is the rise in government sponsored spending (5%), particularly in the social and heavy infrastructure sector.

Globally, most regions have seen a surge in construction inflation since RLB published the Q2 2022 International Report. All regions, except for North Asia, have seen rising construction inflation over the past six months. Adelaide (AUS) has recorded the largest increase over the past six months of an additional 7.8% to now forecast 12.5% for 2022. Conversely, with the zero COVID-19 policy still being adopted in China, Shanghai has forecast a drop in escalation from 7.6% to a de-escalation rate of -4.4% in 2022.